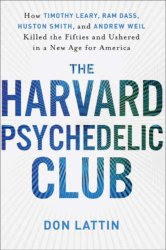 The Harvard Psychedelic Club by Don Lattin is a fascinating look at how three Harvard University professors, and a graduate student came together in the early sixties to turn the world onto mushrooms, mescaline, and LSD-25.

For Timothy Leary, the journey began on the afternoon of August 9th, 1960, when he ingested some psilocybin mushrooms. That trip changed his perception of reality and convinced him psychedelic drugs would soon become an essential tool in the psychologist's toolbox.

Huston Smith had literally written the book on world religions, The Religions of Man, later republished as The World's Religions. He was introduced to Timothy Leary by Aldous Huxley, another Harvard Man, who'd written The Doors of Perception, a book based on his experiments with mescaline. Leary introduced Smith to his "magic mushrooms" on New Year's Day in 1961. It was a bad trip, but it opened him up to the possibilities of what Huxley called these "heaven and hell" drugs.

Richard Alpert was late to the party. By the time he arrived in Mexico, the "magic mushrooms" were gone, and no one knew how to find more, so he had to wait for his conversion. He took his first "trip" in early February of 1961.

After he had been turned onto psychedelics, Leary got the crazy idea the drugs would revolutionize the way we see ourselves. The only thing he was certain of at the time was, psychedelics weren't for everyone. He wanted to feed them to the best and the brightest - graduate students, poets, philosophers, and men of science. People he was sure would be enlightened by the experience. Among those he recruited to his project were Allen Ginsberg, Maynard Ferguson, William Burroughs, and Alan Watts, all noted artists in their fields.

By the spring of 1961, Leary had named his project the Harvard Psilocybin Project, and taken a complete 360-degree turn on who could benefit from his "magic mushrooms." He worked out a deal with Concord State Prison and began doping prisoners in an attempt to retrain their brains, by essentially washing away their criminal tendencies. It was a good idea, but the results weren't that impressive. Leary claimed 75% of those taking his mushrooms, never returned to crime upon their release. Prison officials believed the numbers, but not the reason. They insisted the reason the prisoners didn't return to a life of crime was the attention they received, not the medicine.

Andrew Weil was the graduate student who brought down the Harvard Psychedelic Club. He wrote a story for the Harvard Crimson that denounced Leary's research. He also convinced the father of Harvard student, Ronnie Winton, to have his son tell school authorities Leary and Alpert gave him psychedelics against the University agreement not to include undergraduate students in their research project.

As a result of Weil's article, and Winton's confession, the Harvard Psilocybin Project was shut down, and Leary and Alpert were booted out of Harvard.

It was a wild ride.

Leary went to Mexico and continued his experiments with LSD. Eventually, he would be thrown out of Mexico and removed from several Caribbean Islands for throwing his wild drug parties.

Leary and Alpert's next move was to a commune in Millbrook, New York.

But, to find out the rest of the story, you'll need to read the book.

Like I said at the beginning of this review, it's a fascinating look at Timothy Leary, Richard Alpert, Huston Smith, Andrew Weil, and how they helped turn the world onto mushrooms, mescaline, and LSD.

Along the way, you will be introduced to Ken Kesey and the Merry Pranksters, their Electric Kool-Aid Acid Test, the Grateful Dead, and Dr. Max Rinkel and Dr. Robert Hyde, the men who conducted the first CIA tests with LSD-25 in the early 1950s.

The author's final take was,


Timothy Leary did not inspire the war on drugs all by himself. Yet he was largely to blame for the crackdown on responsible psychedelic drug research in the United States.


It's not the whole story, but it's enough to make you want to learn more. For anyone who grew up in the sixties and early seventies, it's an interesting look backward.