Wilbur and Orville Wright who are at Kitty Hawk, N.C. experimenting with the aeroplane of their own make and regulated by devices of their own invention.

The "Wright Flyer" as they call the machine, is a double-decked, curved aeroplane, driven by a small, but powerful gasoline motor, with aerial screw propellers.

The Wright Flyer is distinctly a flying machine. It has no gas bags or balloon attachments of any kind, but is supported by a pair of aerocurves, or wings, having an area of 510. It measures a little more than 40 feet from tip to tip, and the extreme fore and aft dimension is about 20 feet. The weight, including the body of the aviator, is slightly over 700 pounds. The machine is driven by a pair of aerial screw propellers placed just behind the main wings. The power is supplied by a gasoline motor. It is of the four cycle type and has four cylinders. The pistons are four inches in diameter and have a four inch stroke. At the speed of 1200 revolutions per minute the engine develops sixteen-brake horsepower, with a consumption of a little less than ten pounds of gasoline per hour. The weight including carburettor and fly-wheel, is 152 pounds. The wings, tho apparently very light, have been tested to more than six times the regular load, and it is claimed for the entire structure that it is a practical machine, capable of withstanding the shock of repeated landings, and not a mere toy which much be rebuilt after each flight. The invention is the joint work of the Wright brothers.

Here's another interesting tidbit from the San Francisco Call.

It doesn't fit in with my current research, but I couldn't let this one go unnoticed. I'll get back to you in an upcoming post, and provide more details about this early flyer.

Ran across this cartoon while paging through the San Francisco Call. Had to share it.

Witness the shock on William Jennings Bryans' face when he discovers wheat advancing in price, while silver holds steady.

Apparently only to the stunned Bryan.

Anybody Remember the Old Wilkins Coffee Commercials? It Was Jim Henson Before the Muppets

Just saw a Wilkins puppet come up for sale on Pawn Stars and had to learn more about them.

These commercials are really cool!

Jim Henson, the man behind the Muppets, created them back in the 1950s to promote Wilkins Coffee. I think, what I like most, is even though they're only eight seconds long, they're funny as hell! It's sort of like an early version of Vine Videos - only they were made for TV, rather than the internet.

Now the way the commercials worked, Wilkins was the stand in for Wilkins Coffee. His sidekick, Wontkins, was somewhat of a grump, and usually refused to drink coffee, no matter what stunt Wilkins pulled.

The best way to describe the commercials is The Looney Tunes on steroids, or maybe Wile E Coyote vs the Road Runner.

Wilkins is just hanging out with his cannon like most coffee drinking puppets do. He asks his buddy Wontkins, who just happens to be standing in front of the cannon, what he thinks of Wilkins Coffee. Wontkins says he never tasted it. Next thing you know the cannon goes off in Wontkins face, blowing him away in a whisp of smoke. After a brief pause, Wilkins turns his cannon around to face the audience and asks, "Now what do you think of Wilkins Coffee?"

Read more »
Posted by history blogger at 8:00 PM No comments:

Should America Take a Lesson From Thomas Jefferson's Fight With the Tripoli Pirates? 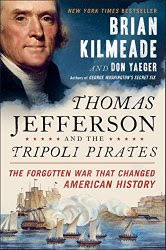 Think terrorism is new? America faced a threat from the Tripoli pirates over 200 years ago. John Adams favored bribing the terrorists. Thomas Jefferson felt the war was the only way to stop such a threat.
In case you're wondering when Jefferson became president he kicked their ass. Maybe we could learn a lesson from the Barbary Wars.
Adams "believed that a war against the Islamic nations would be costly and possibly unwinnable. It would certainly require too large a military force for America's budget." He told Jefferson, "We ought not to fight them at all unless We determine to fight them forever."
Sound familiar. Two centuries ago, John Adams hit the nail on the head. He knew then, what Americans today are just coming to grips with. A war with Islam is impossible for anyone to win. Once started, it's going to be unstoppable.

A Contemporary Account of the Gunfight at the O K Corral

(This is one of the first printed reports of the gunfight at the O. K. Corral. It was printed in the Arizona Weekly Citizen on October 30, 1881, and is reprinted here in its entirety.)

Marshal Virgil Earp, Morgan and Wyatt Earp and Doc Holliday Meet the cowboys—Three men killed and two wounded, one seriously—Origin of the trouble and its tragical termination.

The 26th of October will always be marked as one of the crimson days in the annals of Tombstone, a day when blood flowed as water, and human life was held as shuttlecock, a day always to be remembered as witnessing the bloodiest and deadliest street fight that has ever occurred in this place, or probably in the territory.

The Origin of the trouble dates back to the first arrest of Stillwell and Spencer for the robbery of the Bisbee stage. The co-operation of the Earps with the sheriff and his deputies in the arrest causing a number of the cowboys to, it is said, threaten the lives of all interested in the capture. Still, nothing occurred to indicate that any such threats would be carried into execution. But Tuesday night Ike Clanton and Doc Holliday had some difficulty in the Alhambra saloon. Hard words passed between them, and when they parted it was generally understood that the feeling between the two men was that of intense hatred. Yesterday morning Clanton came on the street armed with a rifle and revolver, but was almost immediately arrested by Marshal Earp, disarmed and fined by Justice Wallace for carrying concealed weapons. While in the court room Wyatt Earp told him that as he had made threats against his life he wanted him to make his fight, to say how, when and where he would fight, and to get his crowd, and he (Wyatt)would be on hand.
Read more »
Posted by history blogger at 9:02 AM No comments:

Donald Trump By the Book

You can learn a lot about a man from the books he writes.

The America We Deserve, was published in 2000, and was released in conjunction with Trump’s run for president. It spelled out his political agenda.

Even before 9/11, and the rise of Al Qaeda and ISIS, Trump predicted a growing terrorist threat. He saw it as a natural outgrowth of America’s increasing involvement in regional politics. His solution was totally unique. Trump advocated expanding the intelligence community so they could sniff out dangers before they occurred. The twist was, he wanted to create a national lottery where the proceeds would be used to pay for his spy network.

Similar to today, he was tough on immigration and wanted to control who entered this country. He said we needed to stop helping every Tom, Dick, and Harry nation out there. And, when we did help, we shouldn’t be so generous. We should send those countries a bill for our services.